This is a story about one of those life events that seems routine that turns upside down real quick. 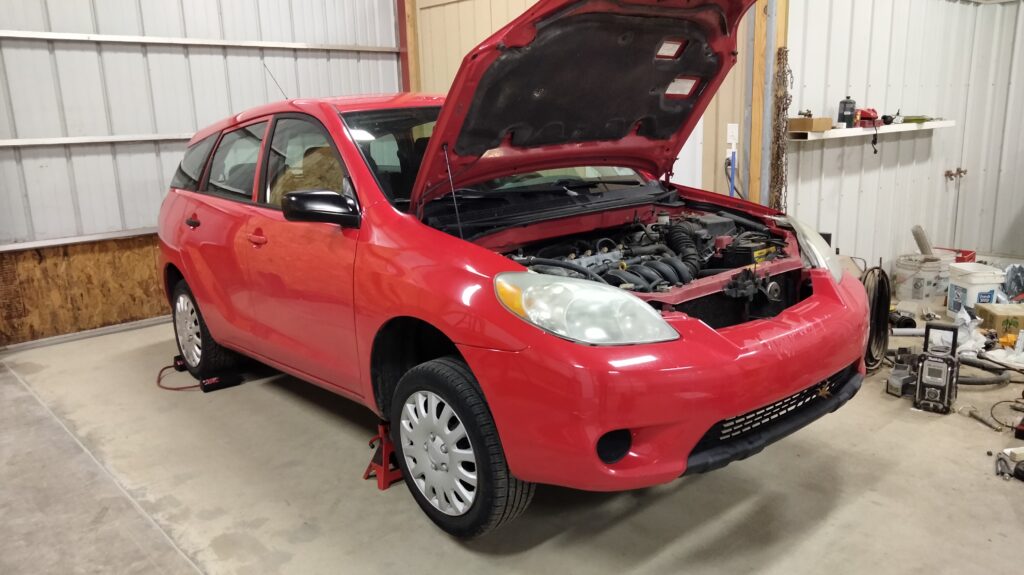 The Red Ranger herself

It started as a routine clutch replacement. Mine started rattling a little while idling, so I decided to go ahead and change it before it gave out entirely. This is the third or fourth clutch I've done, so I wasn't worried about it and went into the weekend expecting to take at least a full day of work, maybe a couple hours into the next.

All was going well until we started to remove the transmission. My brother in law was under the car and I heard a low, "Oh dear." That's when the adventure started. 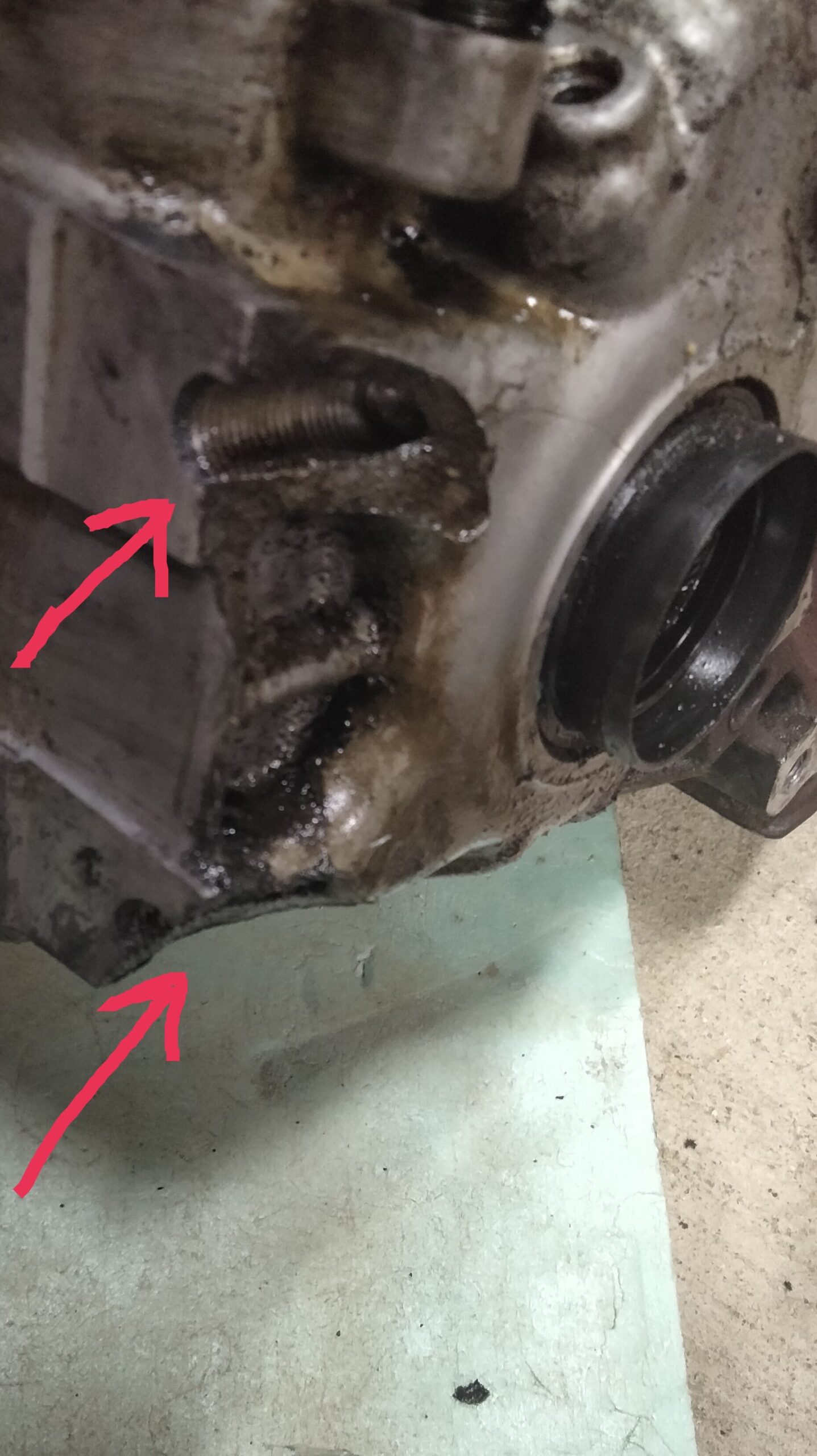 You should not be able to see those bolt threads.

The casing where the transmission mounts to the body of the car had broken at some point. This is a Bad Thing to Happen because if the one remaining bolt had broken, the entire engine and transmission of the car could have rotated backwards and essentially torn itself apart.

My car is sort of a chimera. The original transmission (5-speed manual) is well known for a bad bearing, which causes catastrophic failure. So, mine has a 6-speed, replaced by the previous owner. It's a more robust transmission and is highly sought after. I wanted to keep the six-speed, but we couldn't find an economical option (rebuilt transmissions can start at $1,800). And this is when we discovered - and ultimately went with - option three: find a five-speed transmission and take the portion with the engine mount and put it on the six-speed.

We headed off to the junkyard and - miraculously - found a wrecked car with an undamaged five-speed manual transmission still in the engine compartment. Jackpot.

Two days later, I was the proud owner of a junkyard transmission and a broken six speed. It was time to hybridize parts yet again. 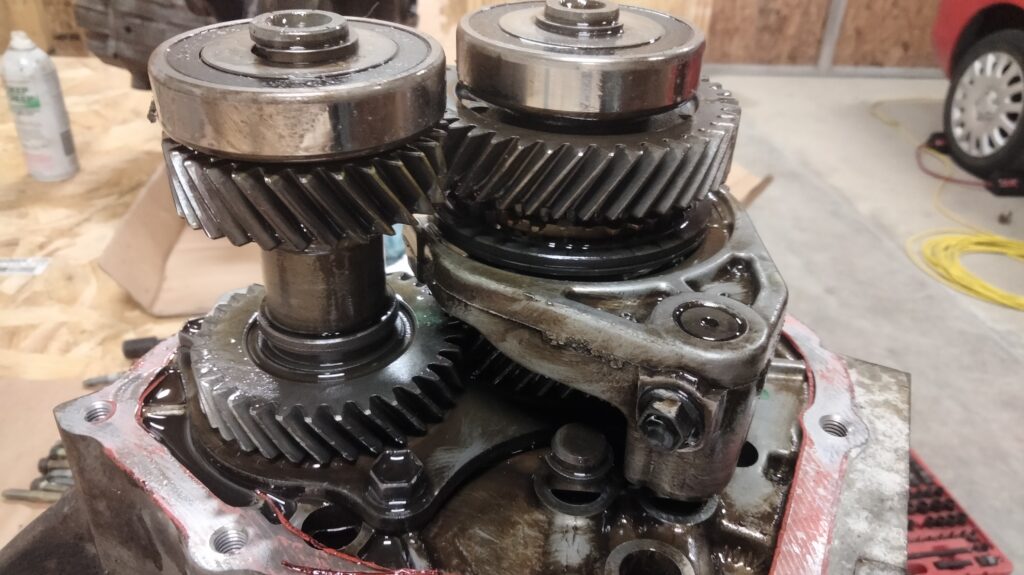 As complex as these machines look, they're still simple enough to repair.

Problem three: get into the transmission. These are complicated machines that work so well, their overall design hasn't really changed since cars were invented. A series of levers slide collars over gears which send power to the wheels. The power of the Internet confirmed that we were on the right track and we even found a mechanic with a GoPro who showed exactly how to take the transmission apart. So, we set to work.

A couple hours and a broken tool later, we gave up for the night. I went home, questioning every decision I've made to this point. I woke up after a fitful night of sleep and decided it was time to just take the things somewhere. I called nearly every transmission shop and mechanic in the region, but no one wanted to take on such a daring project. Most transmission shops don't even touch manual shift vehicles anymore, which is a bummer. They're repairable! I'll save those comments on American replacement-ism for another day.

Late that morning, I caved and called the dealer service department. Their transmission engineer was willing to give it a shot. With a burst of hope, I loaded everything into the van and drove down to drop things off.

The next day, the shop called and the transmission tech decided it wasn't something he wanted to mess with, either. I asked that he simply remove those top gears so I could dive into the belly myself, which he agreed to. Back to square whatever-we-were-on-two-days-ago.

At this point, I had resolved myself to buckling down and doing the work. Several late evenings and a full Saturday with my brothers-in-law working with me, we had the transmission repaired and re-assembled. The most difficult part, frankly, is getting the thing (it weighs ~90 pounds [41kg] assembled, so it isn't small) back into the tight engine compartment. But we managed it and I could see the light at the end of the tunnel.

Another late night, alone in the garage, and the car is nearly done. After I hook up the battery, I decided to start the engine before I put the wheels back on. All had gone well and I was looking forward to being home before 11PM.

The good news is that a non-starting car is not usually do to the transmission. So, something was wrong, but it probably wasn't the big something that we just fixed. I started poking and prodding with a multimeter to find the culprit.

The battery was good. The starter was good. I had ground between the battery and the body of the car. The dashboard would light up and I could even get the radio going. So, there was a short somewhere, but I couldn't find it on my own. Generally, you need to be checking power while someone tries to start the car.

I got one of the brothers-in-law back over to help out and we found one ground wire that had a slight loose connecting, but it was slight enough that the starter couldn't pull enough power from the battery. Those connections matter a lot, especially in that high-current surge to turn the engine over cold.

At 10PM on Monday night, the car started for the first time in over a week. The clutch is smooth and the gear shifting feels like butter. It's driving well and I feel like we can easily get another 100K out of this little sprite.

I could write a trite thing about time and patience, both of which were stretched in this little party, but I won't. This was just one of those life things that will help me remember that big projects are doable when you break them down, rely on the expertise and wisdom of others, and get your hands dirty to solve a problem when one comes up.

Comments are always open. You can get in touch by sending me an email at brian@ohheybrian.com