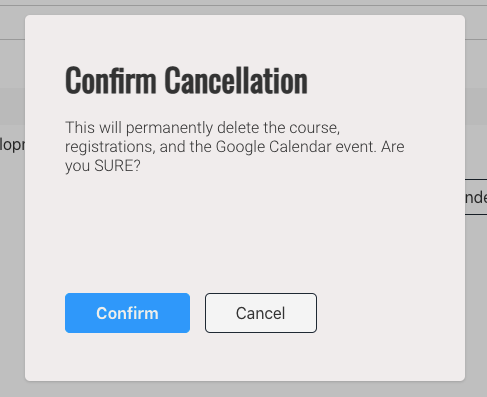 SuperAdmins can make edits to users within the platform. Their login matches their Google account, but maybe they want their first name to be displayed differently. Or, more importantly, they didn't register for an event that they actually showed up for. If an edit is necessary, the SuperAdmin can do all of those things in the sidebar. This is the same sidebar mentioned in the post on presenters with different form fields thrown in there.

I decided not to all admins to disenroll a user from an event because we want to be able to look at what was registered for vs what was actually attended. There isn't a view for this report yet, but we'll be able to do that in the future.

This was a project of necessity to help us move forward as a cohesive team but it was also one of significant learning for me. This is my real first full-stack project from the database up to the frontend. The entire project is on Github, and while it isn't ready for general distribution yet, you can look at the design from the code level.

There are several features I've added since starting these posts (duplicating events, UI updates, mobile styles, accessibility styles, etc) that I won't be visiting specifically. I'm going to do one last post on technical aspects and explain some of my design and code choices if you're interested.

If this is something you'd like to consider using in your school or district, I'd be happy to set up a demo to walk through the platform as a whole. Get in touch if you'd like to do that.

Comments are always open. You can get in touch by sending me an email at brian@ohheybrian.com